All Citizens wishing to travel to Angola must make their Travel Registration form.

All Citizen wishing to travel to Angola must obtain their Angola Health Travel Registration form. In the context of the prevention against the COVID-19 pandemic, a Travel Registration Form (FRV) was created, with the aim of obtaining information on the characterization of passengers wishing to travel to Angola. For an effective and efficient management of the pandemic, the health authorities of Angola must take note of their trip to Angola, to ensuring the proper health control that the State of Public Calamity requires.

Step 4 – Once in Angola, you will be accompanied by the health authorities, and you must strictly comply with the Quarantine for 7 days.

Step 5 – After 7 days, the passenger must undergo a SARS-COV-2 test. The end of home quarantine is determined by issuing a discharge certificate, provided that the test result is negative.

Upon arrival in Angola, you will have to present your passport, Angola Visa get Angola visa along with your printed Travel Form code to certify the authenticity of the request. and all the documents you submitted with your application.

If you have already purchased your ticket and are already registered with an Angolan Embassy abroad, as part of the ongoing repatriation, you do not need to re-register, the information you provided to the embassy will ensure your registration.

The launch of Angola Health Form

From the launch of the FRV, we suggest that you register to return with a minimum of 72 hours in advance, so that. Receive a specific notice that your request for return to Angola is properly registered.

Receive Comfirmation of Pre-arrival Registration Via e-Mail. Take the printed copy along.

Upon arrival in Angola, you will have to present your passport along with your Angola travel torm Registration.

Our professional travel assistance services include: support and submission of your visa apppcation to immigration, providing information regarding apppcation status and results via email or similar types of communication.

What is the Angola Travel Form?

The Travel Registration Form (FRV) was created, with the aim of obtaining information on the characterization of passengers wishing to travel to Angola.

What requirements must my traveler meet to apply Angola FRV?

The Passenger who is entitled to travel to Angola.

Passenger must have approval Angola visa Apply for Angola Visa

What do I need to register for an Angola travel form?

Your passports must have a validity of 9 months and at least 2 blank pages:

How long to received the Angola Travel form registration code?

You will receives an e-mail short time after completed the online application, with code to certify the authenticity of the request.

Where to register for Angola travel form?

After the pre-visa is granted, travellers can then obtain a visa on arrival at the following designated ports of entry.

Upon arrival in Angola, you will have to present your passport along with your printed e-Visa and all the other documents that were part of the application.

What is the cost of Angola e-Visa and Travel Registration Form (FRV)?

The Angola e-Visa costs USD 120.00 which must be paid upon arrival. Additionally, we charge a service fee to process Angola e-Visa online,Because all travellers now requires to get the online approval before travelling to Angola.

Yellow Fever vaccine is required if travepng from a country with risk of yellow fever transmission.

More information in the following link:


yellow-fever-transmission-and-countries-requiring-yellow-fever-vaccination
Which Country are eligible for a Angola Tourist e-Visa? 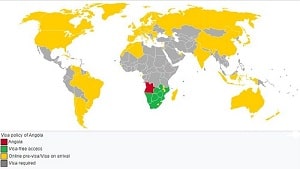 Can I extend the stay period of the e-Visa?

Yes, the Angola Tourist e-Visa stay period can be extended by up to 30 days Total. However you would need to contact an Angolan diplomatic and consular missions to do so.

2. A tourist visa must be used within 60 days from the issue date and is valid for 30 days, a period that can be extended once for an additional period of 30 days. Passports must have a validity of 9 months and at least 2 blank pages. 3. Transit without visa is allowed for passengers continuing their trip to a third country by the same or first departing plane if they do not leave the airport. In the future, Angola is expected to participate in the KAZA UniVisa programme, which if delivered as planned will allow holders of the KAZA visa to travel freely between Angola, Botswana, Namibia, Zambia, and Zimbabwe. 5. Transit: Passengers with a confirmed onward ticket for a flight to a third country within 24 hours. They must stay in the international transit area of the airport and have the documents required for their next destination.

Angola Travel Health Advice
If I made a mistake on my application, Can I make change?

If you do, however, realize you made a mistake before your visa or Travel Registration Form (FRV) has been issued, then please contact us ASAP by sending an email to support, once it's issued, we can not change or modify any details on the e-Visa.