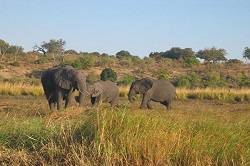 Cameia National Park is a visitor attraction in Angola. It is a national park in the Moxico province of Angola, located at about 1100 m above sea level. It shares its name with the nearby municipality of Cameia. The Cameia–Luacano road forms the northern boundary of the park with the Chifumage River forming the southern portion of the eastern boundary and the Lumege and Luena rivers the south-western boundary. 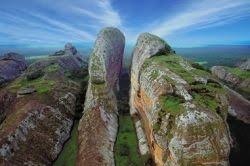 Cangandala National Park is another visitor attraction in Angola. It is the smallest National Park in the country and is situated in the Malanje province. It is situated between the Cuije river and 2 unnamed territories of the Cuanza River, with the towns of Culamagia and Techongolola on the edges of the park. The park was created in 1963 while Angola was still under Portuguese colony.

Iona National Park, located in Namibe Province, is another popular tourist destination. It is about 200 kilometres (120 miles) from the city of Moçâmedes and, at 15,200 square kilometres (5,850 square miles), the largest in the country. Before the Angolan Civil War, Iona was an "animal paradise, rich in big game". However, as is true for most Angolan national parks, illegal poaching and the destruction of infrastructure.